Opening week of the season was much kinder than previous years with the river in good nick and the warm(ish) weather bringing some good hatches of olives, particularly those of the large dark variety. Trout have been coming to the surface to feed on these, albeit sproadically during the warmest part of the day. Members have reported these wild fish to be in great condition for this time of year which bodes well for the season. The below fish was caught on a small dry Greenwells Glory on 26th March. 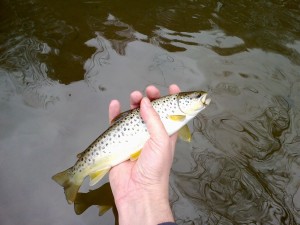 Nick Wood was a little unlucky over the weekend, connecting with several fish but failing to get any in to his newly purchased scoop net! We do have photographic proof that he was into a good fish, this one was estimated around the pound mark and put up a good scrap just before slipping the hook at the net and darting back under the tree he came from! Better luck next time Nick…. 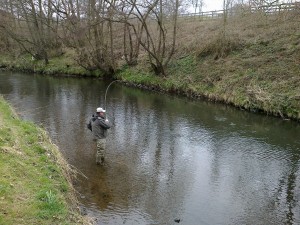